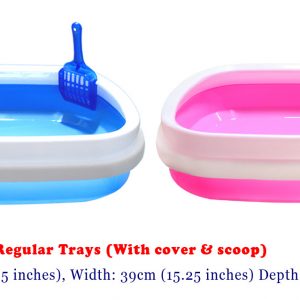 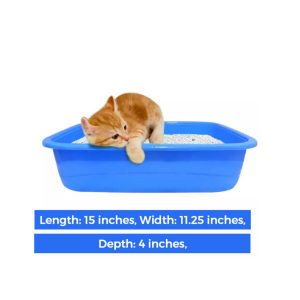 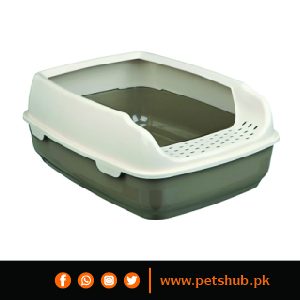 Add to Wishlist
Out of stock

Cat Litter Trays & Boxes now and again called a sandbox, feline box, litter plate, feline container, or litter skillet, is an indoor excrement and pee assortment box for felines, just as bunnies, ferrets, little pigs, little canines, and different pets that intuitively or through preparing will utilize such a vault. They have accommodated pets that are allowed free wander of a home yet who can’t or don’t generally go outside to discharge their metabolic waste.

Numerous proprietors of these creatures don’t really want to allow them to meander outside for dread that they may capitulate to open-air risks. By and large, indoor felines have a life expectancy of 16.8 years while open-air felines’ lives are a lot more limited, just 5.6 years.[1] These outside perils incorporate climate, natural life, traffic, or illnesses, for example, the catlike immunodeficiency virus.

In the wild, felines normally discharge in delicate or sandy soil for simple entombment. They utilize their paws in a regressive clearing movement to cover their dung. To invigorate this instinctual want, a litter box’s base is regularly loaded up with 2 inches (5 cm) or less of feline litter.

Litter box filler is a free, granular material that assimilates dampness and scents like alkali. Some litter brands contain preparing soft drinks to assimilate such smells, or proprietors might sprinkle a slender layer in the lower part of the crate, under the feline litter.

Cat Litter Trays & boxes that the litter is filled can radiate a solid scent, if not discarded as expected. It is suggested that the litter box be kept in low rush hour gridlock spaces of the home, for example, a storm cellar or pantry to stay away from litter box aversion.

What Are The Key Benefits Of Cat Litter Trays & Box: